‘A dream builds home and hope’ - pertinently titled project would cater to Abinta’s passion to ensure a decent and stable home for children to grow-up so that they can prosper in life and in turn return the favour by showing similar commitment to their community.

The founder of the Abinta Kabir Foundation had great affinity with the day-to-day struggles the people with marginal or often no income; in her own words, “I am acutely sensitive to the tremendous hardships faced by ordinary people in Bangladesh and also understand that these hardships are a result of many centuries of unplanned growth, strong prejudices and lack of education”.

The Abinta Kabir Foundation (AKF) feels strongly that a peaceful home ensures successful contributions in overall social growth of the nation by the household members. The peace can only be attained in a home that is strong and built to last for a lifetime. Hence AKF partnered with the Habitat for Humanity Bangladesh to build 12 decent and affordable homes in the Brahmongaon village (Kaliganjupzilla) in the district of Gazipur.

The Habitat has been working with low income families to build strength, stability, and self-reliance through shelter since 1999. It currently operates in Dhaka along with other 8 districts. The programme include decent, affordable housing, clean water, and safe sanitation training in affordable construction technology as well as disaster response and mitigation. Habitat works with partners and volunteers to build decent homes as a way out of poverty.

The whole process of initiation of this particular project stemmed from Abinta’s continuous effort to help the underprivileged families so that they can be self-reliant and be able to bring significant changes in their life styles. AKF designed two specific programmes to bring this dream project into reality. These are:

Abinta herself volunteered with multiple ‘build projects’ of the Habitat while she was studying in the American International School in Dhaka.

AKF introduced a ‘Young Volunteer Fellowship’ programme in partnership with the Habitat Bangladesh for two years (2017-2018) in memory of Abinta Kabir. The ultimate goal for creating this particular position is two-fold: (a) mobilising youth, particularly girls, toward volunteerism; and (b) acquaint them to take leading roles in initiatives designed for making changes in the society. The main role of this fellow is to encourage women to be independent and empowered. The position, funded by the Foundation, fulfils the dual role of building woman leadership and encouraging volunteerism among the youth of Bangladesh.A volunteer Coordinator,Maisha Maliha was recruited in October, 2017 as a fellow for this program.The Foundation provides financial support for two years to the appointed volunteer for the followings:

Maisha works with the senior Manager of Communications and Volunteer programmes at the Habitat Bangladesh. She is mainly responsible to overlook the habitat project of the Foundation. She is also responsible to carry out research to raise awareness on the necessity of proper housing in Bangladesh among the young volunteers of Habitat Bangladesh. The focus of this programme is for the fellow to develop a guideline for volunteerism in Bangladesh – concentrating mainly on the needs of decent housing. The other objective of this fellowship is to help the Habitat Bangladesh to design a guideline to ensure young people, particularly young girls, to get involved in social works, develop skills to find resources and to organise relevant events.

The principle objective of this fellowship is to benefit young volunteers, educational institutes and people/families living in the substandard housing. She is also responsible to conduct a research on Volunteerism in Bangladesh, which will be the first of its kind in the country.AKF provides salary and other relevant benefits, such as transportation and other work related travels, laptop etc. for two years to the Youth Volunteer Coordinator.

Keeping in mind Abinta’s zeal and genuine desire to help the less fortunate – “I believe that people are inherently good and thus humans are at times naturally inclined to help others” – hundreds of volunteer participated in the annual build event. The foundation – committed to uphold Abinta’s aspirations to contribute in making underprivileged people’s life prosper, generously donated to cover construction as well as material costs for twelve homes.

This particular event, so aptly titled, “Abinta’s Build” – was inaugurated on 17th of November, 2017 where more than 350 volunteer participated to achieve the seemingly insurmountable task. They built 12 homes for 12 families leading lives of extreme hardship in substandard houses in Brahmongaon, Kaliganj of Gazipur district. In partnership with AKF, the special youth event will have a lasting and positive impact in Bangladesh. The inauguration programme for this particular project was held on the field of a primary school in Brahmangaon. The Country Director of Habitat, Mr John Armstrong, the AKF’s General Secretary, Ms Ruba Ahmed and the US Ambassador, Ms Marcia Bernicat attended the ceremony with volunteers and other esteemed guests. The houses side walls were already constructed; the volunteers helped to lay out the concrete floors. The homeowners worked alongside the volunteers too. On the inauguration day, 8 houses were built. Each house has one bedroom, one porch/veranda, one attached latrine, and one arsenic-free tube well for drinking or otherwise.

The selection criteria of these house owners were decided jointly by AKF and the Habitat Bangladesh. These are as follows:

This event was to re-establish Abinta’s commitments to assist families to strengthen their effort to be self-reliant and subsequently their life styles and also to encourage volunteerism, particularly among youths and initiate community services. The event, organised jointly by AKF and the Habitat Bangladesh was widely and actively participated by young women from Abinta’s own family and friends, various non-governmental organisations and representatives from media.

The second phase of the event took place in a series of building projects which lasted for a month. Various teams of volunteers took part and built the rest 4 homes. The houses were formally handed over to the families in ‘handing over’ ceremony on 17th February, 2018. AKF is still actively involved with these families to improve their overall familial, economic and social situations. The families are regularly receiving training on hygiene, which includes safe drinking water and sanitation.

Handing Over the Key’ Ceremony

The newly built houses were officially handed over to the owners in a house dedication ceremony on 17th February, 2018. Organized by Habitat, this event was attended by the house owners, local CBO leaders and other community leaders. Habitat and AKF representatives. The ceremony was arranged on ‘uthan’ (yard) of the newly built home of Al-Amin Mohsin. The house owners expressed their gratitude for providing them secure house, safe drinking water and hygienic sanitation facilities. They also commented on their changed perception and roles in the community – a result of their improved living condition. 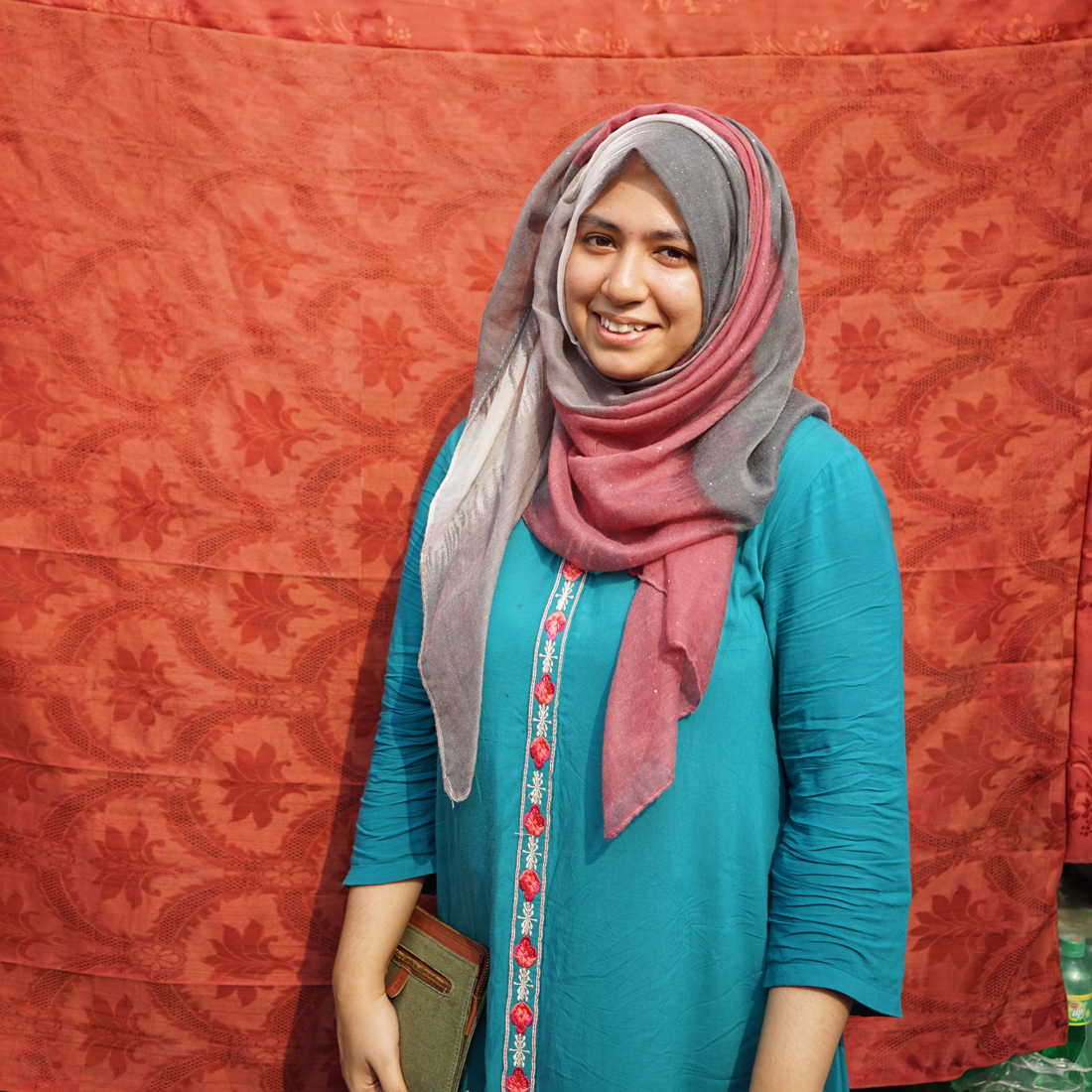 She is responsible to develop the volunteering aspect of the scheme as well. She visits different educational institutes, particularly schools, to build rapport and to raise awareness on volunteerism – specifically on the need of young volunteers in various social causes among students. She surmised that the concept of volunteerism, she amusingly termed it as ‘many hands make light work’, if explained rightly – the youths would be interested to be volunteers and become ‘change makers’. She will carry out an in-depth research on ‘Volunteerism in Bangladesh’ this year.

She found the tasks quite challenging in the beginning since it was her first job after finishing education and also lack of ‘initiation’ training added to her difficulties. But the congenial work environment as well as her affinity with the core objective of the project made it possible for her to shine in her role. She also pointed out that because of her work station being at the Humanity head office, she hardly gets any opportunity to interact with the Foundation and hence have only theoretical idea about the Foundation’s activities. A more regular interactive relationship with AKF is highly desired – she deduced.

She appreciates the opportunities the position offers, such as, meeting youths and spread the worthiness of volunteerism among them, being involved with the underprivileged community and be a part of the changes that the scheme has provided, and most of all – the aura of possibilities evident in people’s eyes – all add to her gratitude for being a part of this project. She believes the Foundation’s scheme to involve youth of our country in social causes would create sensitive and aware future citizens. Abinta – a fitting representative of the philosophy that generation of youth can bring in significant societal change if nurtured accordingly. Abinta herself was a philanthropist and with a foresightedness of a much older person – firmly believed in giving back to the country and its people for a prosperous future. In her own words, “…growing up in Bangladesh, which is a third world nation, meant that I have to give back to my community”.

It is impressive to observe the apparent changes in attitude and perception of life in general – when one has stable and secure homestead. The newly built houses with attached latrines and an ‘arsenic-free’ tube well are proud possessions of 12 fortunate families in Brahmongaon village in Kaliganj. A man’s abode is his heaven – a saying found fruition because of AKF’s founder, Abinta’s ardent ambition to help those who need support to improve their societal position.